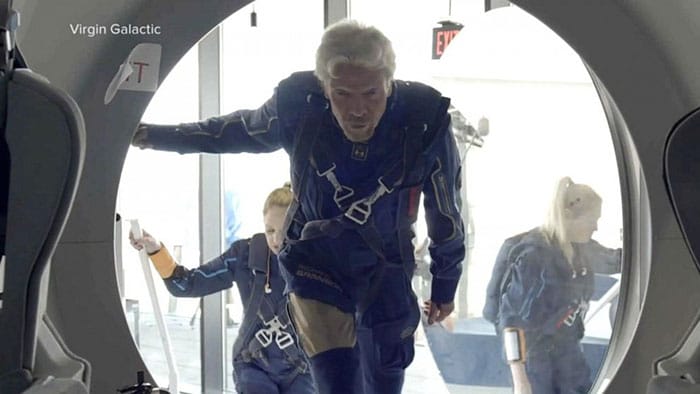 The 70-year-old UK billionaire successfully reached the edge of space with crew members of Virgin Galactic in a commercial space plane Unity launched from New Mexico, and landed safely back at the spaceport on Sunday.

It has been a very long wait for Mr. Branson, the 70-year-old British entrepreneur who leads a galaxy of Virgin companies. In 2004, he founded Virgin Galactic to provide adventurous tourists with rides on rocket-powered planes to the edge of space and back.

At the time, he thought commercial service would begin in two to three years. Instead, close to 17 years have passed. Virgin Galactic says it still has three more test flights to conduct, including the one on Sunday, before it can be ready for paying passengers.

Cars drove Mr. Branson and his crewmates to the plane on Sunday, and the flight took off on Sunday morning around 10:40 a.m. Eastern time from Spaceport America in New Mexico, about 180 miles south of Albuquerque.

The space plane separated from the carrier ship around 11:25 a.m. and ignited its engine for about 60 seconds, carrying Mr. Branson and the crew into space. Video footage from the live stream showed him and the crew experiencing weightlessness.

Minutes later, the plane began its return to Earth in a glide, and soon landed safely on the spaceport’s runway. Mr. Branson, speaking into a camera in the plane’s cabin during the glide, called it “an experience of a lifetime.”

More than an hour later, a giddy Mr. Branson took a stage with his fellow crewmates.

“The whole thing was magical,” he said.

Chris Hadfield, the Canadian astronaut whose performance of David Bowie’s “Space Oddity” from the space station went viral some years ago, then pinned wings on the crewmates’ flight suits that officially designate them as astronauts.Branson and the crew received astronaut wings after their successful trip to space.