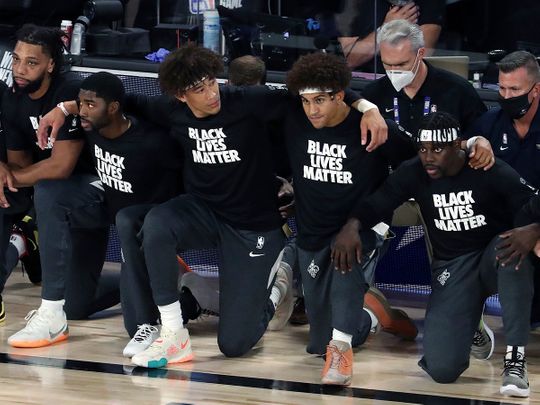 It started with the Milwaukee Bucks on Wednesday over the police shooting of Jacob Blake, black man, which forced the NBA to halt its playoff schedule prompted a string of walkouts by teams and players across other sports.

The US sports body had to postpone its entire slate of Wednesday fixtures after the Bucks refused to play game five of their Eastern Conference first-round series against the Orlando Magic in protest the in Kenosha, Wisconsin on Sunday.

Blake now has serious spine injuries after being shot point blank in the back seven times by police.

“Over the last few days in our home state of Wisconsin, we’ve seen the horrendous video of Jacob Blake being shot in the back seven times by a police officer in Kenosha, and the additional shooting of protestors,” the Bucks players said in a statement explaining their boycott.

“Despite the overwhelming plea for change, there has been no action, so our focus today cannot be on basketball.”

This resulted in the NBA scraping two other games scheduled for Wednesday: Houston’s clash with Oklahoma City Thunder and the Los Angeles Lakers’ matchup with the Portland Trail Blazers.

The boycotts spread to other sports, with the Milwaukee Brewers’ game against the Cincinnati Reds becoming one of several Major League Baseball games to be postponed.

Naomi Osaka, the two-time tennis Grand Slam champion,  also announced her withdrawal from the Western & Southern Open semi-finals, where she was due to play on Thursday.

“Before I am an athlete, I am a black woman. And as a black woman I feel as though there are much more important matters at hand that need immediate attention, rather than watching me play tennis,” Osaka posted in a statement on Twitter.

“I don’t expect anything drastic to happen with me not playing, but if I can get a conversation started in a majority white sport I consider that a step in the right direction.”

Organizers of the ATP/WTA Western & Southern Open in New York later said the tournament will be suspended until Friday.

“As a sport, tennis is collectively taking a stance against racial inequality and social injustice that once again has been thrust to the forefront in the United States,” the statement said.

“The USTA, ATP Tour, and WTA have decided to recognize this moment in time by pausing tournament play at the Western & Southern Open on Thursday, August 27. Play will resume on Friday, August 28.”

It also resulted in the Women’s NBA postponing its scheduled fixtures for Wednesday, while Major League Soccer also called off five of six games.

Los Angeles Lakers superstar LeBron James joined his voice with a tweet. “WE DEMAND CHANGE. SICK OF IT,”.

The NBA’s players union also backed the protest. “The players have, once again, made it clear – they will not be silent on this issue,” National Basketball Players Association executive director Michele Roberts said in a statement.

At an emergency meeting of NBA teams in Florida late Wednesday, the crisis threatened to put the entire season in jeopardy, with LeBron James’ Los Angeles Lakers and Los Angeles Clippers both voting to abandon the season. All other teams voted to continue.

NBA teams have knelt in protest during the pre-match playing of the US national anthem, while the words “Black Lives Matter” have been painted onto each court staging games in Florida.

Players, many of whom took part in protests against Floyd’s killing, have been allowed to wear jerseys bearing social justice messages.