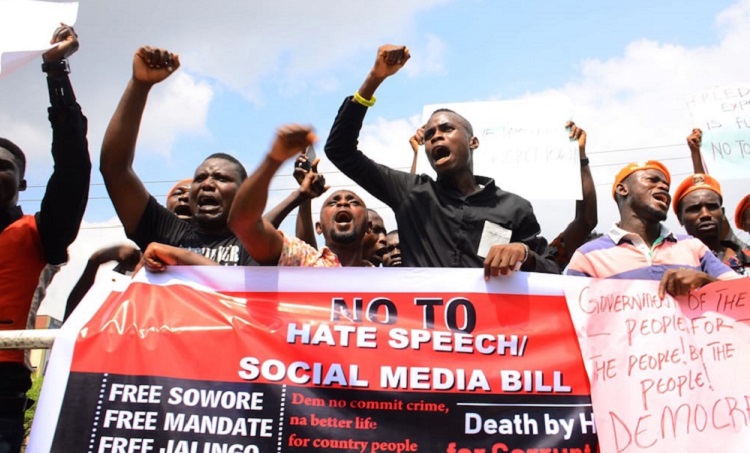 The issue of regulation of social media in Nigeria has been brought to the fore front again as a result of the #EndSARS protest. Social media for the youth has been their platform to expose government’s wrongdoings and mobilize mass action to hold leaders accountable.

Many Nigerians worry that this is simply an attempt to stifle activism and prevent future acts of defiance against the state.

EndSARS protest was not the first time this immense too has been used in Nigeria. It was useful for the  ‘Occupy Nigeria’, ‘Bring Back Our Girls, Say No to Rape Protests’.

The power of social media was massively brought to bear during the protest against police brutality, the EndSARS movement as citizens across the country and overseas, took to Twitter, Instagram, Facebook, WhatsApp and other social platforms to vent their grievances. The trend reached the international community so much that celebrities worldwide lent their voices to the call for an end to the now defunct Special Anti-Robbery Squad (SARS) and the need for a police reform.

In 2015, bill titled, ‘’A Bill for an Act to Prohibit Frivolous Petitions and other Matters Connected therewith”, which was sponsored by Senator Bala Ibn Na’Allah and sought to compel critics to accompany their petitions with sworn court affidavit, or face six months imprisonment upon conviction. But the bill was however fought by many Nigerians, who believed that it negated the fundamental rights of the citizens by restricting their freedom of expression.

After the bill passed second reading, President Muhammadu Buhari distanced himself from it, saying he was committed to free speech. The lawmakers were consequently forced to withdraw the bill.

Four years later, specifically on November 5, 2019, the Senate re-introduced the Bill to regulate the use of social media in the country. The bill, ‘Protection from Internet Falsehood and Manipulations Bill 2019’, was one of the 11 bills read for the first time at Senate plenary.

This time around, the sponsor of the legislation, Senator Mohammed Sani Musa who represents Niger East Senatorial District, said the bill was aimed at curbing fake news on the internet.

This effort did not bring any result as some stakeholders and citizens condemning it yet again.

From the Public Hearing

In March 2020, stakeholders, who attended the Senate Committee on Judiciary and Legal Matters’ public hearing on the Anti-social Media Bill, rejected the bill, claiming it should be trashed.

At the hearing, while making a reference to coronavirus pandemic and it’s impact including on businesses, the Bill sponsor, Senator Musa pressed the audience to see fake news as a virus in need of containment.

However, a few hours later, following testimonies from civil society organisations, government agencies and private citizens, the Nigerian Army and the Supreme Council for Islamic Affairs joined Musa in supporting the bill.

From the Nigerian Communications Commission (NCC) to the Broadcasting Organisations of Nigeria (BON), there was overwhelming consensus that most of the bill’s provisions were already captured in previous legislations like the Cyber Crimes Act of 2015 and the nation’s Penal Code.

After the testimonies, Senator Opeyemi Bamidele, Chairman of the Senate committee on judiciary, human rights and legal matters, said this is a private-member bill and the Senate has not taken a position on the bill, as there are senators for and against the bill.

He said, “We will consider all of this and advise the senate based on our findings after the consideration of all preponderance of opinion written and expressed. We will go by what we see as the overriding public interest.’’

The Minister, explained that the federal government was not seeking to shut down the social media, because it has come to stay, but added that the country should have a social media policy that regulates social media and check fake news and misinformation.

Governors of the 19 states in the North Central, North East and North West, under the Northern Governors’ Forum (NGF) supported the Minister’s call for social media regulation.

Reacting to the Forum’s decision, several groups and individuals told the governors to tackle the weightier problems of insecurity in the region before making social media their priority.

In a statement, the Christian Association of Nigeria (CAN) said it would resist any attempt by the federal government to regulate the social media, which it said has given Nigerians freedom to speak and express themselves. It expressed fears that such move could lead to negative reactions from the youths, which could snowball into another round of civil unrest.

On its part, the Socio Economic Rights and Accountability Project (SERAP) threatened to sue the governors and the National Assembly if the bill was passed and signed by President Muhammadu Buhari.

Rights activist, Aisha Yesufu said: “Northern Governors should focus on the poverty, illiteracy, insecurity, kidnapping killings, street kids in the North. Boko Haram, bandits and kidnappers are the least of the problems of the North. The main problem in the North is the Northern Governors, Northern traditional rulers and Northern religious rulers. There is no need demanding #SecureNorth. The demand should be #FreeNorth.”